Were we ready for the Alphas?

I was recently training a group of teachers and jokingly asked if there was anybody from Generation Z (1995-2010) present. One first year teacher put up his hand. He was the first Gen Z teacher I had encountered.

The idea that we can all be slotted into a groove according to when we were born and then said to share characteristics with everyone else born in those 15 or so years is problematic. However, the notion of there being a set of generalisable characteristics of a group can be useful shorthand to understand people if used with caution.

The Alpha Generation, those children who were born from 2010, started school three years ago. This generation will face the much prophesied 2030 joblessness catastrophe. Being confronted with the Gen Z teacher made me wonder, ‘Were we ready for Generation Alpha?” (Because I am sure we were not ready for Gen Z.)

Who is Generation Alpha?

Like their immediate predecessors, Gen Z, this generation finds great value in using technology in every part of their lives. However, the expectation is that in a context where internet access is guaranteed and the ownership and the use of a computing device or a smartphone is considered the norm, this generation will be completely immersed in the technology world, living the Fourth Industrial Revolution definition of the merging of the human and the technological.

Currently, this is not the case for almost all South African Generation Alphas. However, with the ever-increasing speed at which the Fourth Industrial Revolution makes things move, this could change at any time. Our President has promised devices for learners in schools and with that will come all the expectations of a full member of Generation Alpha.

It would not be wrong to say that their ubiquitous use of technology will lead to an expectation that technology will be part of their educational experience, if not all of it. Perhaps not that an AI machine will teach them all of the time, but certainly that they would work on a device, learn how to use it effectively, and use technology to learn.

The teacher Generation Alpha met in her classroom is the person who is going to have the greatest impact on her, both educationally and as a person, for many years. But who was the teacher that she met?

Who is teaching Generation Alpha?

Members of previous generations are noted to use technology to an increasing extent as their birthdate gets closer to the turn of the millennium. With the use of technology comes a set of beliefs about education and technology in education, and also attitudes to technology as a whole.

We can expect that Generation Alpha’s is most likely to even wonder why someone would have an attitude to technology as it is so part of their existence that they are not aware that technology is separate from them. “Technology is life.” is a likely statement. 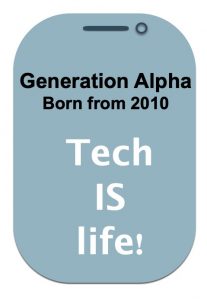 And I think you can see where I am going with this. Putting the actual technology aside, as teachers how ready was our attitude to technology to meet the needs of Generation Alpha? How ready were our teaching methods? Do Generation Y teachers teach like they were taught by their Baby Boomer and Veteran teachers or are they doing things in ways that meet the needs of the Fourth Industrial Revolution?

I don’t think that all is lost for Generation Alpha though. Teachers are intelligent, creative people who thrive on learning. We can explore mindset change and embrace the world that our learners inhabit. This is going to take courage to change, willingness to unlearn, and learn, and a decision to make personal and professional development a personal priority. Learners are flexible too. They will bounce back from what was lost, and they can teach us a great deal – we must just attend to their communication preference!

This post originally appeared on Parent24, as part of the Via Afrika Teacher Collection.